In an attempt to understand how shared print is used, Interlibrary Loan transaction logs were obtained for the EAST Rapid Pod and the EAST OCLC GAC for the 2019 calendar year, given that this was the last “normal” year prior to the pandemic.  A total of 225,900 transactions for titles held by an EAST library were reported from these two services.

Transactions were analyzed to determine:

The resulting numbers were compared to the estimated size of the circulating print collection of the holding library, as it was reported to EAST at the time of the initial collection analysis. Finally, the availability of a digital surrogate for loaned retentions was also investigated.

Only OCLC GAC and Rapid POD data were analyzed. In reality libraries often have other lending networks in which they participate.

Rapid data had only 84% valid OCNs. OCNs were checked by the CRL validator tool to weed out incorrect numbers (where OCN metadata did not match the transaction data). Incorrect numbers and those lacking an OCN were not included in the analysis. Also, any duplicate transactions within one hours time were removed as most likely being the same transaction.

Approximately one quarter of all ILL returnable (book loans) transactions analyzed were for titles published post 2010. These are materials that were out of scope for EAST, and thus would most likely not have a retention commitment.

Data was analyzed into a summary PER TRANSACTION not per OCN.

In general, EAST member libraries retain between 15-30% of their collections for EAST. In this data set, approximately 1% (ranging from .2%-1.6%)  of the circulating print collection was lent via Rapid or OCLC. Of these transactions, almost 44% were on titles that have an EAST retention commitment, though they were not necessarily loaned by the retaining library. When looking at titles that were lent by the retaining libraries, that number drops to 13.9%, and when further limiting to loans where the title was lent to an EAST member, it drops to 5.6% of all ILL transactions. See Figure 1.

When looking only at returnables (books) published pre-2011 (a criteria for retention by EAST), the percentage of transactions that were on retained titles increased to 83%, with 13.4% being lent by the retainer to another EAST institution. See Figure 2.

Also of interest was investigating the total number of EAST retention commitments for those titles which were lent. Approximately 30% of retained titles that were lent had 5 or more copies committed across EAST, while almost 50% had only one retention commitment, with the remaining 20% having 2-4 copies retained across the EAST member libraries. This does, in fact, reflect the distribution of retained titles across the EAST collective collection. 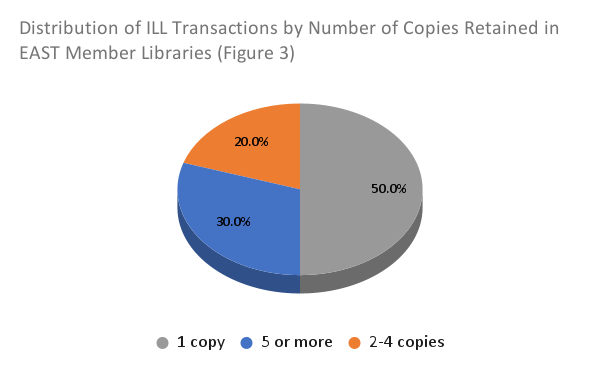 The transactions on retained titles, regardless of whether the retainer was the lender, were also analyzed for the existence of a digital surrogate in HathiTrust or Internet Archive. Approximately half of the transactions were found to have a digital surrogate though only 11% of retained titles that were loaned were open access or available for controlled digital lending.

Approximately one quarter of the lent retention transactions were for titles that lacked a digital surrogate and were retained by only 1 EAST member. These may be candidates for further investigation for digitization.

Based on the fact that circulation in EAST member libraries is likely only 2-3% of the total collection overall, even if half of this is for ILL purposes, the impact of shared print is not great as it accounts for only about 13% of that 1.5-2% or at most 0.003% of the library’s circulating collection. However, a significant portion of the lending is of titles with only one copy retained by EAST and many of these lack a digital surrogate. As EAST and other shared print programs look to ensure access as well as preservation, encouraging and supporting digitization of such materials may be increasingly important.

We realize this data has some severe limitations, and are looking into alternative methods of gathering more comprehensive data. We will be working with the EAST membership on this, and have discovered that IDS users may be able to do this quite easily. ExLibris is also making enhancements that may facilitate collection of this data. In the years to come we may take slices of data from these member libraries.

We also plan to look at the 2022 OCLC and Rapid statistics to compare to 2019. It may be interesting to note any titles were lent in both years and if these might tell us something about needed levels of retention and digitization.

Choose a Quicklink
Learn More About Shared Print
Contact Us